From Actor to Advocate: A New MTV Star Opens Up About the TB Epidemic

Like most young people, Syed Raza Ahmed, 27, knew little about tuberculosis (TB) growing up in Mumbai.

Then the actor landed the role of Vicky Kashyap, who has TB, on a new television show airing on MTV India this month, turning him into an advocate for people living with the disease—a role, he says, he's "proud" to take on.

The TV drama, MTV Nishedh, follows a number of characters coming of age in Mumbai and navigating tricky situations, including health-related challenges. It's part of a new collaboration between Johnson & Johnson and the MTV Staying Alive Foundation to help educate viewers about TB in India.

The country shoulders a particularly high burden of the disease, which claims 1.5 million lives a year globally, primarily in low- and middle-income countries. That’s more than HIV/AIDS and malaria combined, making it the world's deadliest infectious disease. And growing resistance to commonly used medicines is compounding the problem.

On the eve of his new show's debut, Ahmed spoke to us about his hopes for how he might help spread knowledge of TB through his work—and offer support to viewers worldwide who can relate to Vicky’s story.

Q: Tell us a bit about your character, Vicky.

A: In the world of MTV Nishedh's young characters, Vicky is a radio producer and eventual boyfriend to Megha, a radio jockey. Vicky is a happy-go-lucky guy who radiates energy. I liked his positive approach to life, but he’s extremely chilled out. He has suffered from TB in the past, but he discontinues his course of medication midway—and it recurs.

This time, it’s the really serious multidrug-resistant tuberculosis, or MDR-TB. After the relapse, he goes into a shell and isolates himself from the world.

Q: How familiar were you with the issue of MDR-TB before you joined the show?

A: Honestly, I didn’t know about MDR- or extensively drug-resistant TB (XDR-TB). Both are strains in which the bacteria that cause TB stop responding to commonly used medicines. I hardly even knew much about TB itself.

Research shows that there are 2.7 million cases of TB in India annually, out of which at least 500,000 are not even reported, because patients don’t know how to recognize the symptoms.

In India, TB is often thought of as a poor person’s disease, that it’s not going to happen to you. But that is untrue—it can happen to anybody. If you breathe, you are at risk.

Q: How big of a problem is TB in India, especially among young people?

A: Research shows that there are 2.7 million cases of TB in India annually, out of which at least 500,000 are not even reported, because patients don’t know how to recognize the symptoms. Half of all people with TB are under the age of 30. It’s a very serious disease.

Q: Did it scare you at all to take on portraying someone with this disease?

A: We actors are very hungry for good roles, so when I got this part I was really intrigued and knew there was something I could do with it. Newcomers like me don’t get too many experimental roles. I had no preconceived notions about it; in fact, I took it on proudly.

I feel like the show will help the MTV Staying Alive Foundation, a charity that produces original media content about HIV and sexual and reproductive health worldwide, and now TB, reach a lot of young people. 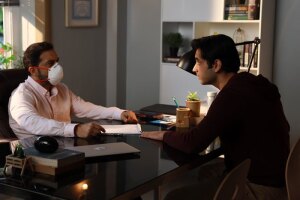 Q: How did you prepare for playing this role?

A: I’d like to share an experience that happened to me when I was in school. A classmate disappeared for a while and came back to school after several months. Our teacher told us he had TB and to stay away from him. He sat alone in one corner of the classroom, and though I think he was not infectious at that stage, we’ve been taught to stay away from people who suffer from this disease.

When I researched TB through watching documentaries and speaking to a doctor cousin of mine, I learned the opposite—not to shun TB patients. I met a TB survivor recently who told me she wanted to commit suicide because it’s such an exhausting process that really takes you to rock bottom. Support and love can bring TB patients to a mentally better place.

Q: What was the most surprising thing you’ve learned about TB while working on this show?

A: It was learning about MDR-TB and XDR-TB and that, for some patients, the most commonly used medications either don't work or stop working. But treatment options for these patients do exist.

I also didn’t know that a quarter of all TB cases worldwide occur in India. Every minute, one person dies of TB in India.

For people who know a TB sufferer, don’t disconnect from them—they need you more than ever. Take precautions, like wearing masks and having proper ventilation in the house, but be around them, show them love and fight with them.

Q: What would you like Indian audiences—and readers around the world—to know most about TB?

A: The message I’d like to send to young people is to stay healthy. It sounds basic, but if you’re in good health and your immune system is strong, it's easier to fight TB, even if you contract it.

For TB patients, the most important message is to communicate, and not isolate themselves. Sure, there might be people who will shut you out, but that’s okay. There will be people who love you who will fight the battle with you, and they’re the important ones. And please take the full course of medication; that’s the only thing that will rid you of this disease.

For people who know a TB sufferer, don’t disconnect from them—they need you more than ever. Take precautions, like wearing masks and having proper ventilation in the house, but be around them, show them love and fight with them.

And for everyone: Please educate yourself about TB properly. Our lack of education is becoming a problem for our country, and for the world.

Read about how the company is working to improve detection, broaden access to treatment, and accelerate research and development for the disease over the next decade. Learn more