6 Entrepreneurs Whose Innovations Could Make GenH the Healthiest Yet

Share
Thanks to their groundbreaking solutions for treating malnourished kids, saving mothers' lives and more, these big thinkers—all winners of Johnson & Johnson's GenH Challenge—are poised to reshape healthcare for future generations.
By Meghan RabbittJanuary 17, 2018
A

necklace that helps doctors ensure a baby is up-to-date on vaccinations. An affordable, child-friendly antibiotic—delivered in a packet of peanut butter—that treats pneumonia and prevents malnutrition.

These are just a couple of the winners of the GenH Challenge: a Johnson & Johnson initiative focused on finding entrepreneurs whose innovations have the potential to help make future generations the healthiest yet.

Since the call for submissions was announced in March 2017, the Challenge has received more than 300 proposals for projects in 54 countries across six continents.

“The GenH Challenge speaks to the heart of innovation: exploring, learning and taking a chance that an everyday idea could change an entire health ecosystem,” says Lauren Moore

Along with mentorship from Johnson & Johnson leaders, these six winners will receive a collective $1 million in funding and other support to help bring their bright ideas for solving some of the world's greatest unmet health needs to the next level—and revolutionize healthcare as we know it.

A Health-Tracking Necklace for Infants 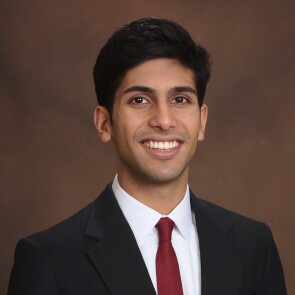 How it was born:
When Nagar, now a second-year Harvard Medical School student, was an undergrad, he took a design class that involved one big project: find a technological solution and business model to address the annual 1.5 million child deaths due to vaccine-preventable diseases.

6 Next Gen Healthcare Innovations Designed to Boost Your Mind, Body and Soul

Nagar, his college teammates and Mohammad Shahnawaz, now COO of Khushi Baby, focused on developing a more efficient way to collect high-quality health records—and help community health workers make more informed decisions about treatment plans by enabling them to better monitor info, such as which vaccines a baby was missing and which mothers were at risk of birth complications.

We believe we can build a blueprint in the Udaipur District that could be adopted, funded and integrated not only by the Rajasthan State Ministry of Health and Family Welfare, but by other states around India and even other countries around the world.

“We formed a partnership with Seva Mandir, a leading nongovernmental organization in Rajasthan, India, responsible for providing maternal and child health services to more than 100 rural villages,” says Nagar. “And after 15 weeks of prototyping, the real discovery took place in the city of Udaipur, where we talked to hundreds of mothers, nurses, community health workers and other players in the existing health information technology space.” 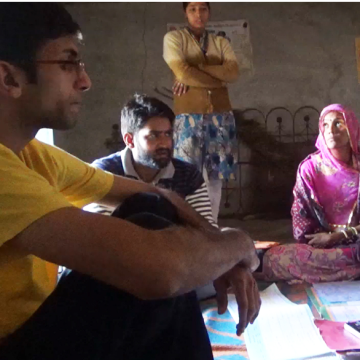 Nagar meets with local mothers to demonstrate how the necklace works

The result? A prototype for a necklace that incorporated cultural norms—such as the practice of wearing black thread to ward off evil—and would store real-time maternal and child health data.

How winning the GenH Challenge can help the company:
Khushi Baby necklaces currently track 30,000 patients each year in the Udaipur District. The funding and mentorship provided by the GenH Challenge will allow the company to cover all health tracking in the district, which would extend their reach to 100,000 births annually.

“In doing this, we believe we can build a blueprint in the Udaipur District that could be adopted, funded and integrated not only by the Rajasthan State Ministry of Health and Family Welfare, but by other states around India and even other countries around the world,” says Nagar.

An Antibiotic Kids Will Want to Take 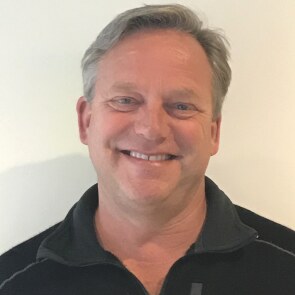 The innovation:
A kid-friendly form of amoxicillin called NutMox that treats pneumonia, the leading killer of young children globally.

How it was born:
NutMox was conceived by UC Berkeley researcher Sangwei Lu, Ph.D., as a version of amoxicillin that's suitable for young children who can’t yet chew or swallow pills.

Peanut butter to the rescue! Not only is it kid-popular, but it’s also heat-safe, shelf-stable, masks taste and requires no chewing. Plus, peanut butter-based Ready-to-Use Therapeutic Food (RUTF) has previously been used effectively to treat severe acute malnutrition.

“We reasoned that children at the most risk of dying from pneumonia are also likely to be at risk for malnutrition,” says Chansler, whose work at PATH aims to get the product into development and use. “NutMox combines amoxicillin with RUTF to offer nutritional support to children at a vulnerable time.”

How winning the GenH Challenge can help the company:
“It will help us move toward product approval through a stringent regulatory agency, like the U.S. Food and Drug Administration," says Chansler, "as well as test NutMox to show that it is biologically and chemically equivalent to already-approved formulations of amoxicillin.” 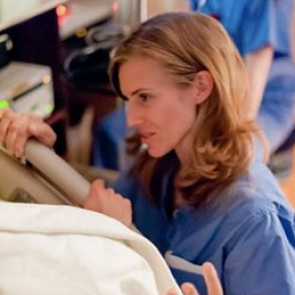 Delivering on Good Everyday: 3 Stories of Young Midwives in Action Around the World

How it was born:
The good news: More women in low-income countries are giving birth in medical clinics and other healthcare facilities, rather than at home or locations ill-equipped to handle emergencies.

The bad news? There are too few birth attendants to handle the new demand. What’s more, many attendants don’t have adequate knowledge about how to treat PPH, says Lundeen, a midwife and member of the Maternal and Newborn Health Research Cooperative at the University of California San Francisco (UCSF) Global Health Sciences.

Virtual Mentor has already won a $250,000 seed grant, which will help Lundeen develop and test her idea in Kenya. Now she’s ready to make and test a prototype, which is what she’ll use GenH Challenge funds to do.

Enter Virtual Mentor, a digital decision navigator that aims to assist birth attendants in the event of a PPH. Ideally, she says, it would walk caregivers through the proper protocol for treating the conditions, answering any questions they may have along the way. 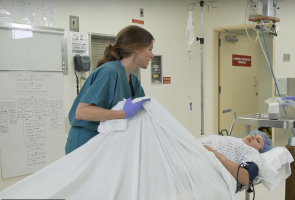 Lundeen demonstrates how the Virtual Mentor (shown above the patient) works

How winning the GenH Challenge can help the company:
Virtual Mentor has already won a $250,000 seed grant, which will help Lundeen develop and test her idea in Kenya. Now she’s ready to make and test a prototype, which is what she’ll use GenH Challenge funds to do.

“It’s my hope that with this proof of concept, we will later scale Virtual Mentor to other emergency scenarios,” says Lundeen, “from neonatal resuscitation to preeclampsia and even stroke.”

A Baby Box for Moms in South Asia 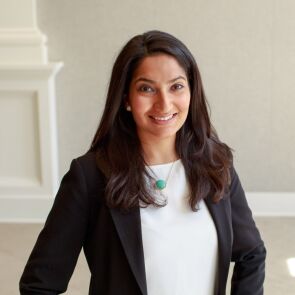 The innovation:
A curated bundle of such lifesaving solutions as a clean birth kit and thermometer; care items (baby clothes, a receiving blanket and sanitary napkins); and health education materials on breastfeeding, handwashing and infant care—all packaged in a safe sleep bamboo cradle. Barakat Bundle supports expectant mothers in South Asia—where 300,000 mothers and over 4 million infants a year die during delivery and postdelivery, respectively. So in order to receive the bundle, mothers must agree to give birth at a healthcare center.

Thinking Inside the Box: How Johnson & Johnson Is Helping Give Babies in Haiti a Safe Place to Sleep

How it was born:
In January 2015, Ladhani read an article about a highly successful Finnish government program that distributed boxes to new moms packed with newborn essentials that also served as safe sleep spaces. The one prerequisite for receiving a box: expectant moms had to visit a healthcare professional to receive prenatal care.

“Distributing these baby boxes conditional on prenatal care was a simple way to provide basic infant care items and encourage families to connect to their local health system,” she says. “I immediately thought of the immense benefits that something similar could have in a developing country.”

So, after Ladhani worked with more than 100 mothers and healthcare workers to learn how best to reach her South Asian target audience, Barakat Bundle came to life.

How winning the GenH Challenge can help the company:
One of Ladhani’s biggest goals is to prove Barakat Bundle’s effectiveness at motivating behavior change and reducing preventable infant and maternal mortality rates in South Asia: “With this support from the GenH Challenge, we can conduct a proof of concept pilot to quantify the program’s impact, which will allow us to scale effectively and bring it to those most in need.”

A Way to Collect Lifesaving Data in Africa 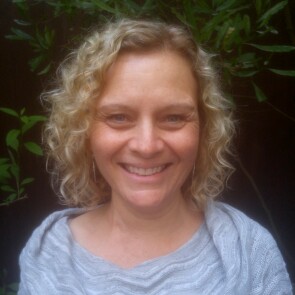 The innovation:
The Ihangane Project has created the first point-of-care digital health record in Rwanda, giving nurses and doctors the real-time data they need to treat patients effectively—and dramatically improve maternal and child health as a result.

How it was born:
In East Africa, many frontline healthcare workers see data reporting as a burdensome government-mandated requirement rather than a tool that can drastically improve patient outcomes.

“So we co-created a Continuous Quality Improvement (CQI) program with healthcare workers in Rwanda to try and eliminate malnutrition and HIV among HIV-exposed infants,” says Dr. Leonard.

Healthcare workers have become actively engaged in collecting, analyzing and acting upon data. They are now leading the way to develop E-Heza, our maternal-child digital health record.

The joint effort paid off: Since initiating the program in 2013, nurses’ ability to accurately diagnose malnutrition has increased by 74%, and infant HIV testing at the appropriate intervals has increased by a staggering 800%—all of which has led to a 66% decrease in malnutrition and the elimination of mother-to-child HIV transmission (defined as zero cases in more than 12 months) in the communities where they work. 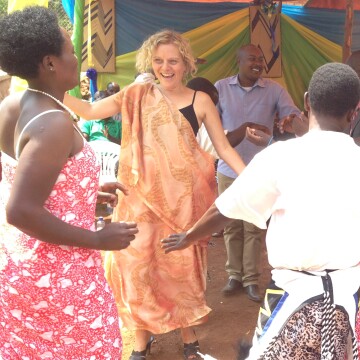 “Healthcare workers have become actively engaged in collecting, analyzing and acting upon data,” says Dr. Leonard. “They are now leading the way to develop E-Heza, our maternal-child digital health record.”

How winning the GenH Challenge can help the company:
The funds from the GenH Challenge will allow The Ihangane Project to pilot, refine and expand E-Heza throughout Rwanda in partnership with the Rwanda Ministry of Health. “Even more importantly, the success of this initiative will serve as crucial evidence that community-level innovation can drive system-level change,” says Dr. Leonard. 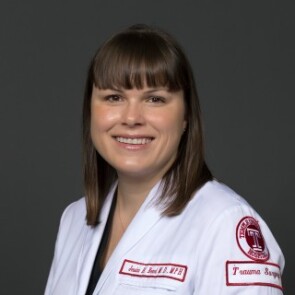 The innovation:
A curriculum that trains non-surgeon medical professionals on how to conduct a mesh hernia repair—a simple, cost-effective, essential surgery that is often not performed when it should be in low-income countries due to a lack of surgeons.

The Johnson & Johnson Institute: 9 Facts About a Program That Trains 125,000 Healthcare Providers Each Year

How it was born:
Each year, a staggering 223 million people suffer from inguinal hernia, which occurs when tissue, such as part of the intestine, protrudes through a weak spot in the abdominal muscles—making it the most common general surgical condition in the world. In Africa, inguinal hernias often go untreated and become large, painful, disfiguring and sometimes even deadly.

“Our idea is to leverage Ghana’s existing system of ‘task-sharing’ surgical care with non-surgeons to increase the capacity for safe, high-quality inguinal hernia repair with surgical mesh,” says Dr. Beard.

How winning the GenH Challenge can help the company:
Dr. Beard and Ohene-Yeboah plan to scale this program to nine hospitals around Ghana. They'll also prototype a toolkit for hernia repair that would ensure sustainability of the training program. If successful, their program would be the first of its kind proven to have a positive impact on the volume of essential surgery in Africa.

“Our ultimate goal has always been to increase access to high-quality hernia surgery for the poorest patients in Ghana and the world,” says Dr. Beard. “The GenH Challenge will hopefully bring us closer to this reality.”